A “Revue” of the West Coast “Eastside Sound” Music Scene During the Early 1960’s in Southern California.

Those who have a soul and a heartbeat, know that music has the power to move you physically and emotionally. The music from the 1950s and 1960s captured and reflected the range of emotions and concerns of that generation. Youthful innocence was being affected by the “Cold War”, the Space Race, the Vietnam War and the civil-rights unrest in many of our cities. We also experienced a rising awareness of many social afflictions. In light and dark times, music has always been vital to communicate our feelings. Music also satisfies a deep, primal melodic need. During this sometimes turbulent era, our spirits were nurtured by the musical offerings of “The British Invasion”, Motown, R&B, Country, Rock and Roll, Rockabilly and Chicano Soul. Just to name a few.

In Los Angeles and East LA in particular, a renaissance of youthful and local talent emerged. The enduring contributions by the local bands and singers from the East LA area are part of the music explosion and enrichment of that time. Here are but a few of those talented individuals that helped us navigate through those youthful times of love, heartbreak, and social awakenings. Much joy was given to us by these musical poets and crooners. 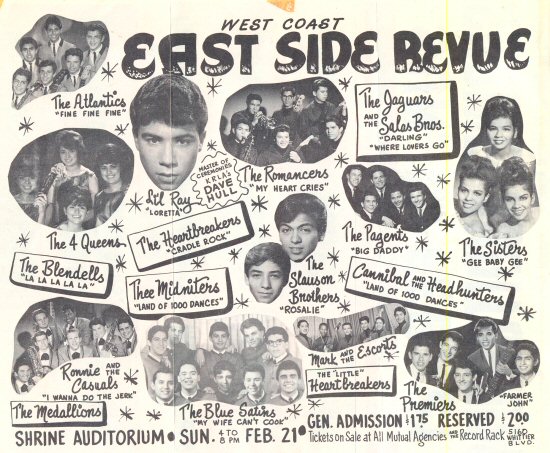 These Historic images of the bands and recording artists are a small part of the popular music scene of that time. This partial representation provides a clue of the immense talent of the musical groups of that era. There were hundreds of great music groups! The slideshow includes the following images: Cannibal and the Headhunters, Lil Ray Jimenez, Mickey and the Invaders, Ambertones, Blendells, Blue Satins, Enchantments, The Jaguars, Thee Midniters, Mixtures, The Premiers, Romances, The Sisters, Village Callers, Mark and the Escorts, Johnny and the Crowns, and The Salas Brothers.

Other notables: The Silhouettes, The Originals, The Imperials, Ronnie and the Casuals, The Counts, The Progressions, The Atlantics, The Heartbreakers, The Five J’s, The V.I.P.s, Clarence Playa, The Impalas, The Lyrics, The Nite-liters, The Viscounts, The Story Tellers, The Essents, Epics, Exotics, Los Blue Angels, The Checkmates, The Alderman, The Fabulons, The Eternals, The Emeralds, and The Prophets.